Posted on April 22, 2013 by anthrobiopolitics 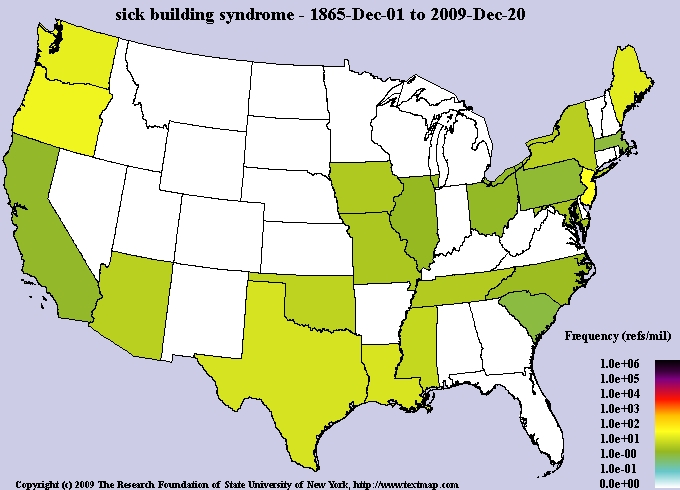 The phenomenon of what is known as “sick building syndrome” (SBS) provides the context for Michelle Murphy‘s 2006 published biopolitical history of knowledge/power/subjectification. Through (re)materializing processes of truth-making and uncertainty advanced by feminist, labor, environmentalist, and civil rights organizing in the U.S., the history of SBS illustrates the gendering and racializing processes of producing what Murphy calls “normal science”. Additionally, by analyzing “regimes of perceptibility”, she reveals how the politics of knowledge production and the process of materialization involve obscuring awareness of certain things in order to make others more pronounced, known, and thus controllable. In the following post, I review some of the major components of Murphy’s work that, ultimately, I suggest help frame a particular mode of analysis that is especially useful for anthropological studies of biopower.

The challenge of SBS as an assemblage of uncertainty is that its very materialization in mainstream perception depends upon its continuing immateriality. That is, it has only come to exist as a known ‘syndrome’ because “normal science” (or white male dominated, corporate-controlled science, especially under neoliberalism) is unable to trace its symptoms back to a normative and measurable chemical cause. This seems particularly significant in regards to the biopolitically calculated body which, although it is claimed modern science is making medicine and biology increasingly individualized, is also increasingly diagnosed with countless new disorders according to standards of ‘normal’ body chemical measurements. SBS represents a sort of counter-example in this regard, because while pharmaceutical companies increasingly develop treatments for things that have never before been considered illnesses, SBS remains untreatable so long as its causes remain unmeasurable. Moreover, as Murphy points out, once a measurable cause for SBS symptoms can be determined, it is no longer considered “sick building syndrome”.

Race, class, and gender in this context are shown to be spatially-significant markers of difference in enacting regimes of perceptibility and making them powerful. Thus, it is through race, gender and class that new knowledges and new regimes of perception become materialized in built environments and lived experiences. From the
“universal subject” of the young white male engineer “in a box”, to the white middle-class female office worker/activist and the “alley-dwelling African American” neighbors of the EPA headquarters, bodies and spaces are co-materialized and rematerialized through shifting regimes of knowledge that are themselves raced, classed, and gendered anew.

Potentially dialogic with theories of social movements that conceptualize group-actor projects as “alternative knowledge practices” (see Casas-Cortes et al. 2008), Murphy demonstrates how the power-laden raced/classed/gendered regimes of perceptibility also create “domains of imperceptibility” that may be acted upon as an inventive space. For instance, the domination of technoscientific knowledge over Western medical ways of knowing health and the body leave unknown a number of ways to measure, experience, and act upon perceptions of health and unhealth that go unchecked and indeterminate. Individuals who experience such indeterminate forms of suffering thereby come into a domain of imperceptibility in which alternative forms of self-care and self-understanding can be experimented with and perfected as coping regimes, outside of dominant regimes of knowledge/power/subjectivity.

While in one sense this may be understood as two or more competing separate epistemologies, as Murphy  illustrates with the case of ecology-centered perspectives, competing regimes of knowledge, when contextualized temporally, are in fact fundamentally inseparable. They are equivalent to Hegemony-Counterhegemonies that dialectically shape one another. And, as seen in various ways with the ecological perspective, counterhegemonic regimes of knowledge/practice are usually captured by the dominant regime and rematerialized in new ways.

The toolkit developed by Murphy in this book, which is made up of “assemblages”, “materializations”, and “regimes of perceptibility”, I believe is very useful for constructing a more complex biopolitical analysis because it allows anthropological researchers to “study up” and study grassroots lived experience at the same time in very revealing ways. By showing the generative interactions between the three key terminological frameworks in practice, we can gain a deeper understanding of how knowledge/power/subjectivity may also be seen as interrelational dialectic processes  of hegemony/counterhegemony that are performed, contested and materialized in and on bodies, spaces, and time. Discipline, self-care, and “massified” populations under regimes of knowledge and power ultimately come together quite tidily through the messiness explored by Murphy in this book. It seems, in all its complexity, to represent an analytic method that could be applied to a range of diverse and messy study contexts with great effect for the anthropologist of biopower.

This entry was posted in Cultural Anthropology and tagged science and race, sick building syndrome, women workers and science. Bookmark the permalink.